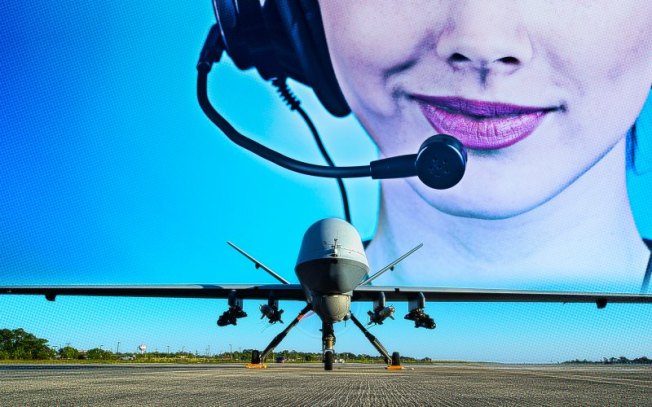 “When you hit a truck full of people, there are limbs and legs everywhere,” Sparkle said. “I watched a guy crawl away from the wreckage after one shot with no lower body. He slowly died. You have to watch that. You don’t get to turn away.”

Anne crawled out of bed in her North Las Vegas house around 10 p.m. and started to get ready for her shift.

She pulled her chestnut hair into a bun and slipped on her olive green flight suit. In the kitchen, she packed fruit to snack on during her shift and stuffed her schoolwork into her backpack-sized lunchbox just in case it’s a boring night. Most nights she doesn’t have a chance to open a book.

Giving her dog, a tan Sher-Pei/pit bull mix, one last pat, she left her house and joined thousands of other workers leaving for the midnight shift. While most people were heading to hotels and casinos in town, Hubbard was on her way to Creech Air Force Base and a war.

At Creech, she is assigned to a reconnaissance squadron flying missions over Iraq and Afghanistan. Few weapons in the American arsenal are more relentless than the RPA fleet, often called drones. For more than a decade, the United States has flown RPAs over Afghanistan and Iraq, providing forces on the ground with an eye in the sky to spot terrorists and insurgents, and in most cases the firepower to destroy them.

As she rode to work, Anne—or “Sparkle” as she’s known to her fellow drone operators—wasn’t focused on the desert outside her window. It was 2009 and President Obama was sending troops in a surge to Afghanistan. Sparkle’s mind was on a desert 7,000 miles away. Over the next 24 hours she would track an insurgent, watch as he was killed by a Hellfire missile, and spy on his funeral before ending her night with a breakfast beer and a trip to the dog park.

The RPA has become the symbol of America’s ongoing wars, from Afghanistan to Somalia to Syria. And, 14 years after a U.S. “drone” first fired a missile at an al Qaeda operative, the morality and legality of remote strikes remains a matter of intense controversy. Earlier this year, the U.S. government revealed it accidentallykilled one of its own citizens with a drone—a hostage held by al Qaeda—triggering another round of debate about when the U.S. is justified in using the remotely piloted planes to attack.

On Thursday, the Intercept published a cache of new documents about RPA missions in Afghanistan, Somalia and Yemen. The documents paint a damning picture of the RPA, including an internal U.S. military study that found a “critical shortfall” in how targets are identified. The government’s reliance on cellphones has led to the wrong target being killed. The new documents also call into question the accuracy of the RPA. The Intercept reports more than 200 people were killed – only 35 were actual targets – in Afghanistan between January 2012 and February 2013.

“This outrageous explosion of watchlisting—of monitoring people and racking and stacking them on lists, assigning them numbers…  assigning them death sentences without notice, on a worldwide battlefield—it was, from the very first instance, wrong,” the source of the documents told the Intercept. “We’re allowing this to happen. And by ‘we,’ I mean every American citizen who has access to this information now, but continues to do nothing about it.”

But for all the attention paid to RPAs, the men and women who operate the 21st century’s most divisive weapons system remain largely hidden from public view—except for reports about strikes, especially when a missile kills civilians.

A pilot’s heads up display in a ground control station shows a truck from the view of a camera on an MQ-9 Reaper during a training mission. The Reaper is the Air Force’s first “hunter-killer” unmanned aerial vehicle (UAV) and is designed to engage time-sensitive targets on the battlefield as well as provide intelligence and surveillance. The jet-fighter sized Reapers are 36 feet long with 66-foot wingspans and can fly for as long as 14 hours fully loaded with laser-guided bombs and air-to-ground missiles. (Ethan Miller/Getty Images)”