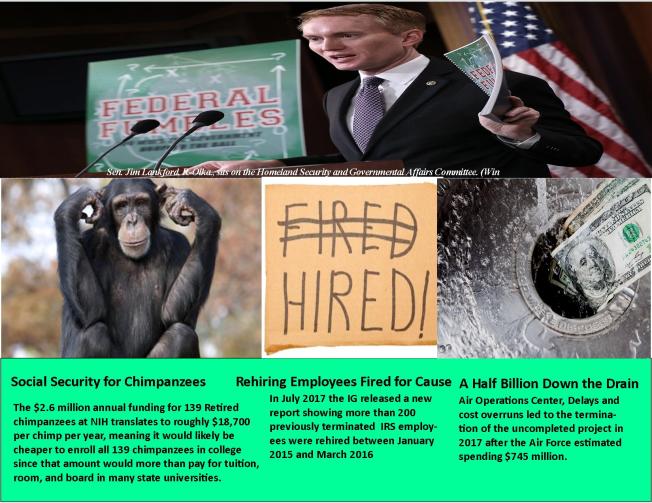 The report highlights 100 examples of the government’s wasteful spending, lack of oversight, needed structural changes, and wasted effort, the Oklahoma Republican said during a Monday press conference on Capitol Hill.”

“This book is designed to be a reminder that we still have an issue with debt and deficit in America,” Lankford said. “For some reason, the conversation has slowed on the issue of debt and deficit; it should not, this should be an ongoing part of our conversation.”

The current debt is $20.49 trillion, and the fiscal 2017 deficit is $666 billion. Lankford’s report represents $473.6 billion in waste and inefficient spending.

This year’s report includes everything from offbeat arts grants that are worth less than $40,000, to more serious big budget items like the $400 billion production delay of the F-35 Joint Strike Fighter.

The reason for the range of examples, Lankford said, is to illustrate a set of larger issues and the need to address them with straightforward solutions, starting with the budget and appropriations process, as well as the grant process.

“Over the years there’s been a lot of attention paid to contracting and how we’re actually putting checks out for individual contracts,” Lankford said. “That same attention has not been paid to the grant process. Because of that, it’s the easiest way to be able to actually get dollars out the door. More and more agencies are spending more and more on grants. Those grants have little to no oversight, so the grants need additional oversight in the process and we need to be able to fix that.”

Among those grants was a $30,000 National Endowment for the Arts grant to support a production called “Doggie Hamlet.”

The production, according to the report, “actually includes humans yelling and running toward very confused sheep and dogs. The production, which does not include any lines from ‘Hamlet,’ is conducted outdoors in a 30-by-50-foot field in New Hampshire.”

Lankford said he’d seen clips of the performance, and while it’s fine if the local community wants to fund it, “I’m just confused why the people of Oklahoma, they’re paying for the production of ‘Doggie Hamlet’ in New Hampshire.”

Similarly, the Transportation Department gave $1 billion to San Diego to expand its trolley service by about 11 miles. That means federal taxpayers in Oklahoma — and across the country — are also paying $100 million per mile for a trolley they won’t use, Lankford said.

While those grants are examples of lack of oversight, a $40,000 study by the National Science Foundation to learn how refugees are handling their move to Iceland, is an example of wasteful spending.

An example of needed structural change is the delay of a biometric entry and exit visa program for immigration. Another is the 450-day time frame it takes to hire one border patrol officer.

“These issues sound simplistic to solve, but they are real structural problems both with hiring and how things actually operate in these different agencies,” Lankford said. “These need to be addressed.”

Lankford said the ways to improve upon these problems include fixing Senate rules and streamlining the budget process.

“I think we should do appropriations every two years rather than every year,” Lankford said. “That gives us more time with the committees to not have to worry about putting things together for this year.”

Lankford said Senate rules also prevent debate and solving some of the harder issues. If lawmakers can’t debate the issues and discuss how to solve them, they won’t be fixed.

“Some of these things come up every single year and everyone says why is it not addressed again,” Lankford said. “Some of it is a structural problem in the United States Senate, where we cannot get to the issues and be able to address those. My hope is that we can actually get to the point that we can fix the structural problems here in the Senate and actually be able to do the real work.”

Along with fumbles, the report also highlights improvements.

Some of these “touchdowns” include the Environmental Protection Agency’s decision to repeal a rule about governing small rivers and bodies of water, an Agriculture Department decision to loosen requirements around public school lunches and the Trump administration’s “one in, two out” practice.

“In just the first half of 2017, federal agencies withdrew or rolled back 469 agency actions that had been announced in the fall of 2016 and cut in half the number of planned regulations that will have an impact of more than $100 million a year on our economy,” the report stated.

Areas that didn’t make it to the end zone but still made up yards include more oversight and accountability for a council that coordinates transportation for low income people to medical appointments. Another area is improving communication to avoid duplicative grants or programs, like requiring agencies to submit a report to Congress if it wants to award a grant that is identical to an existing program.

“Our focus is that this is the to-do list for this next year and as we work through this to-do list, our staff is assigned to say ‘where can we find places to be able to address this; in appropriations language, with the authorizing committees, working with the administration, where can we help find this,’” Lankford said. “And we help try to identify some that we’ve already seen in the past year in this as well as some of the things that are ongoing and current appropriations language this year to try to address it.”