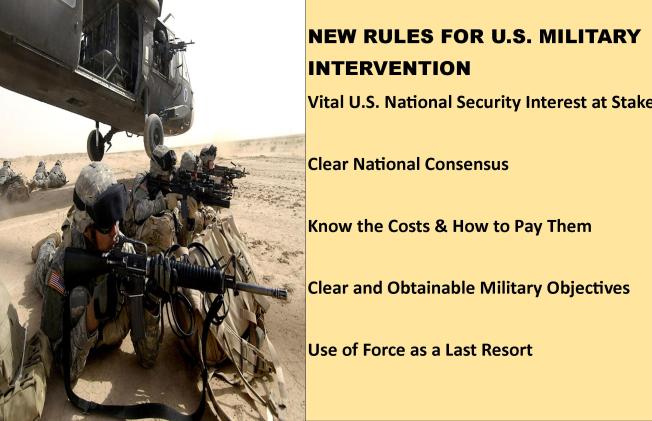 “WAR ON THE ROCKS”

“Americans today enjoy a measure of safety that our ancestors would envy and that our contemporaries do envy.

We generally do not need to wage war to keep it that way.

On the contrary, some recent wars have degraded the U.S. military and undermined our security. Policymakers should therefore be extremely reluctant to risk American lives abroad.

The U.S. military is the finest fighting force in the world; it comprises dedicated professionals who are willing and able to fight almost anywhere, practically on a moment’s notice. Any military large enough to defend our vital national security interests will always be capable of intervening in distant disputes. But that does not mean that it should. Policymakers have an obligation to carefully weigh the most momentous decision that they are ever asked to make. These criteria can help.

Any nation with vast power will be tempted to use it. In this respect, the United States is exceptional because its power is so immense. Small, weak countries avoid fighting in distant disputes; the risk that troops, ships, or planes sent elsewhere will be unavailable for defense of the homeland generally keeps these nations focused on more proximate dangers. The U.S. government, by contrast, doesn’t have to worry that deploying U.S. forces abroad might leave America vulnerable to attack by powerful adversaries.

There is another factor that explains the United States’ propensity to go abroad in search of monsters to destroy: Americans are a generous people, and we like helping others. We have often responded favorably when others appeal to us for assistance. Many Americans look back proudly on the moments in the middle and latter half of the 20th century when the U.S. military provided the crucial margin of victory over Nazi Germany, Imperial Japan, and the Soviet Union.

But, in recent years, Americans have grown more reluctant to send U.S. troops hither and yon. There is a growing appreciation of the fact that Washington’s willingness to intervene abroad – from Somalia and the Balkans in the 1990s, to Iraq and Afghanistan in the 2000s, to Libya and Yemen in the present decades – has often undermined U.S. security. We have become embroiled in disputes that we don’t understand and rarely can control. Thus, public anxiety about becoming sucked into another Middle Eastern civil war effectively blocked overt U.S. intervention in Syria in 2013, notwithstanding President Obama’s ill-considered red line warning to Bashar al Assad.

But while the American people are unenthusiastic about armed intervention, especially when it might involve U.S. ground troops, most Washington-based policy elites retain their activist instincts. They believe that U.S. military intervention generally advances global security and that the absence of U.S. leadership invites chaos. The essays in this series, “Course Correction,” have documented the many reasons why these assumptions might not be true. The authors have urged policymakers to consider other ways for the United States to remain engaged globally – ways that do not obligate the American people to bear all the costs and that do not obligate U.S. troops to bear all the risks.

But the authors do not presume that the United States must never wage war. There are indeed times when it should. Policymakers should, however, keep five specific guidelines in mind before supporting military intervention, especially the use of ground troops. Doing so would discipline our choices, would clearly signal when the U.S. military is likely to be deployed abroad, and could empower others to act when the United States does not.

The United States should not send U.S. troops into harm’s way unless a vital U.S. national security interest is at stake. Unfortunately, the consensus in Washington defines U.S. national security interests too broadly. Protecting the physical security of the territory of the United States and ensuring the safety of its people are vital national security interests. Advancing U.S. prosperity is an important goal, but it is best achieved by peaceful means, most importantly through trade and other forms of voluntary exchange. Similarly, the U.S. military should generally not be used to spread U.S. values, such as liberal democracy and human rights. It should be focused on defending this country from physical threats. The military should be poised to deter attacks and to fight and win the nation’s wars if deterrence fails.

The criterion offered here is more stringent, for example, than the Weinberger-Powell Doctrine, which held that U.S. troops should not be sent overseas “unless the particular engagement or occasion is deemed vital to our national interest or that of our allies.” By effectively equating U.S. national interests with those of our allies, it allowed for a range of interventions that would not be considered automatically valid under the guidelines spelled out here.  Policymakers should not risk the lives of U.S. troops to protect others’ interests as though those interests were our own.

The American people must understand why they are being asked to risk blood and treasure and, crucially, they must have a say in whether to do so. The U.S. military should not be engaged in combat operations overseas unless there is a clear national consensus behind the mission.

Although modern technology allows constituents to communicate their policy preferences easily, traditional methods are just as effective in ascertaining whether the American people support the use of force. We should rely on the tool written into the Constitution: the stipulation that Congress alone, not the president, possesses the power to take the country to war.

As Gene Healy notes in this series, Congress has regularly evaded its obligations. Although the U.S. military has been in a continuous state of war over the past 15 years, few in Congress have ever weighed in publicly on the wisdom or folly of any particular foreign conflict. Some now interpret Article 5 of the North Atlantic Treaty or United Nations Security Council resolutions as obligating the United States to wage war without explicit authorization from Congress. This is unacceptable. The president may repel attacks against the United States, but the authority to deploy U.S. forces abroad, and to engage in preemptive or preventative wars of choice, resides with Congress — and by extension the people — of the United States.

Understanding of the Costs—and How to Pay Them

We must also understand the costs of war and know how we will pay them before we choose to go down that path. We cannot accurately gauge popular support for a given military intervention overseas if the case for war is built on unrealistic expectations and best-case scenarios. There is no such thing as a free lunch, and there is certainly no such thing as a free war.

Deficit spending allows the federal government to pretend otherwise. Politicians make promises, with bills coming due long after they’ve left office. But we should expect more when it comes to the use of force. Advocates for a military intervention should be forced to frame their solution in relation to costs and benefits. The debit side of the ledger includes the long-term costs of care for the veterans of the conflict. Hawks must also explain what government expenditures should be cut – or taxes increased – to pay for their war. The American people should have the final say in choosing whether additional military spending to prosecute minor, distant conflicts is worth the cost, including the opportunity costs: the crucial domestic priorities that must be forgone or future taxes paid.

We cannot compare the costs or wisdom of going to war if we do not know what our troops will be asked to do. The U.S. military should never be sent into harm’s way without a set of clear and obtainable military objectives.

Such considerations do not apply when a country’s survival is at stake. But wars of choice — the types of wars that the United States has fought in Iraq, Afghanistan, Libya, and elsewhere — are different. Advocates for such wars must demonstrate not only that the fight is necessary to secure vital U.S. interests, that it has public support, and that it has funding, but also that the military’s mission is defined and attainable.

Military victory is rarely sufficient, however, as our recent wars and interventions demonstrate. In the case of regime-change wars, ensuring that a successful transition to a stable, friendly government occurs can take a considerable amount of time and resources. Whatever replaces the defeated forces must represent a marked improvement in order for the war to advance U.S. vital interests. U.S. leaders, therefore, must not only define the military objective, but also detail what the resultant peace will look like, and how we will know the mission is complete.

It is easy for Washington to start wars, but we cannot leave U.S. troops on the hook for ending them. Policymakers must account for the tendency of war to drag on for years or more, and they must plan for an acceptable exit strategy before committing troops.

Use of Force as a Last Resort

The four criteria above are not enough to establish a war’s legitimacy, or the wisdom of waging it. After all, modern nation-states have the ability to wreak unimaginable horror on a massive scale. That obviously doesn’t imply that they should. Thus, the fifth and final rule concerning military intervention is force should be used only as a last resort, after we have exhausted other means for resolving a foreign policy challenge that threatens vital U.S. national security interests.

This point is informed by centuries-old concepts of justice. Civilized societies abhor war, even those waged for the right reasons while adhering to widely respected norms, such as proportionality and reasonable protections for noncombatants. War, given its uncertainty and destructiveness, should never be entered into lightly or for trivial reasons.

America has an exceptional capacity for waging war. U.S. policymakers therefore have a particular obligation to remember that war is a last resort. Precisely because no one else is likely to constrain them, they must constrain themselves.

U.S. foreign policy should contain a built-in presumption against the use of force. That does not mean that war is never the answer, but rather that it is rarely the best answer. Americans today enjoy a measure of safety that our ancestors would envy and that our contemporaries do envy. We generally do not need to wage war to keep it that way. On the contrary, some recent wars have degraded the U.S. military and undermined our security. Policymakers should therefore be extremely reluctant to risk American lives abroad.

The U.S. military is the finest fighting force in the world; it comprises dedicated professionals who are willing and able to fight almost anywhere, practically on a moment’s notice. Any military large enough to defend our vital national security interests will always be capable of intervening in distant disputes. But that does not mean that it should.”